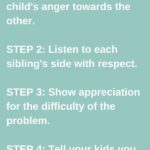 Inside: Is it possible to have siblings without rivalry? Two experts provide solutions to sibling rivalry including what specifically parents should do when kids fight.

How many times have you heard exclamations like these exchanged between your kids? Often yelled. Sometimes accompanied by physicality.

At one point or another most siblings fight, or show their frustrations with each other in other ways .

Sibling disagreements are normal, as they are in any relationship. But when sibling arguments escalate to an uncontrollable point, parents can feel hopeless and unsure what to do.

Our homes feel tense as our kids bicker and argue. And it can be exhausting to be placed in the position of referee, day-in and day-out.

And then there are the siblings who seem never to get along. They’re constantly at odds – prodding each other or squabbling over minor infractions.

It may seem as though there’s simply nothing a parent can do.

But as Adele Faber and Elaine Mazlish explain in their book Siblings Without Rivalry, parents can help shape sibling relationships for the better, even in the most dire situations.

In this post, I’ll outline some of the key takeaways from their book. But I still highly recommend reading the whole book (it’s a quick read). There’s simply a lot of valuable knowledge shared that can’t be covered in a single post.

Click on the image below to be taken to Siblings Without Rivalry on Amazon.

One key theme in the book Siblings Without Rivalry is that parents actually play a large role in how children perceive each other and whether or not they get along.

While it may appear that our children simply don’t like each other or were born to fight, there are a few things parents unknowingly do that creates tension in their childrens’ relationship.

Here’s what parents need to avoid:

Comparing siblings either favorably or unfavorably

One common thing parents do is compare their children in either favorable or unfavorable ways.

For example, a parent may say that one child is better than the other at cleaning his room, or is more studious or more creative.

While sharing a positive comparison with a child may seem harmless, especially if you praise the other child in other ways, it can create an environment where the child receiving the praise now has vested interest in making sure the other child doesn’t take his or her prized spot. Meanwhile, the child not receiving the praise in that moment may become jealous of the one who is.

Likewise, negative comparisons, or telling a failing child they aren’t doing as good a job as their sibling, can damage the downtrodden child’s self-esteem and make them view their sibling as the cause.

It’s natural for kids to wonder if they’re more loved or favored than their siblings. And so, they’re often on the lookout for ways in which their sibling is receiving better treatment than they are.

This is a tricky situation for parents because it’s very difficult to treat children completely equally at all times and in every situation. At any given moment, it may be true that one child is getting more attention or resources than the other(s).

When this happens, kids often know it. And it makes insistence by parents that they’re giving each of their kids equal treatment ring hollow. Further, it can inflame kids’s jealousy and cause them to see their sibling as a rival to their parent’s affection and attention.

To get out of this quagmire and diffuse rivalry, parents can instead focus on each child’s individual needs.

For example, if a child complains about a sibling receiving more pancakes than she did, avoid arguing the truth behind that statement. Instead, focus on the underlying issue expressed – that the child is still hungry.

And if a child asks if you love them as much as their siblings, avoid declaring equality. Instead, express appreciation for the unique qualities each child possesses.

Casting each child into a role

But casting our kids into different roles in our minds – and especially communicating these perceptions – creates an environment where children begin to lock themselves into this identity.

Instead of labeling, parents can help support each child to be what they want to be. The first step in this process is for the parent to have faith that change is possible. Our own mindset of our child can have an impact on how they view themselves.

For example, if a parent considers one child to be the family’s talented musician it can limit the other child’s interests or ability just because their sibling shows such promise. The seemingly untalented child needs parents’ support to realize their own potential. Otherwise, the child not labelled as talented may feel resentment towards the talented one.

Next, here’s what to do when fights break out

One valuable part of Siblings Without Rivalry is when the authors outline step-by-step how parents should respond when confronted with a sibling fight.

Even if you do your best to influence sibling relationships positively, fights are still bound to happen. But rather than just reacting when they do, take a step back, a deep breath, and act on the following advice. Not only can your actions make a huge difference in resolving the conflict in the moment, but you’ll also be decreasing the chance others one will arise in the future.

The best part of this formula is that it not only reduces tension immediately, but can also reduce the possibility that similar arguments will escalate in the future. That’s because this process also shows kids themselves the most effective ways to resolve conflicts.

These steps allow kids to feel heard but take you, the parent, out of the equation of solving the problem.

(Note that within Siblings Without Rivalry the authors also explain two other formulas they use for very difficult conflicts and potentially dangerous situations.)

The first item on the list deserves special attention, partly because it can be counter-intuitive.

A child’s complicated emotions can come out as hateful, mean, or even downright disturbing attacks on a sibling they feel in competition with. In those situations, any parent’s natural instinct might be to dismiss those negative feelings or to criticize the child for acting out, in an attempt to shut down the negativity.

But an important way to ease the tension and work to prevent future fights among siblings, is to acknowledge the negative feelings each child is feeling and expressing.

This may seem counterintuitive. Shouldn’t the child expressing the bad behavior know and understand what they did wrong?

Yes. But not right away.

It’s helpful to first consider the motive behind the bad behavior. For most children, acting out, especially towards their sibling, is an effort to try to be heard and understood.

So acknowledging this child’s feelings (though not condoning the associated bad behavior) lets the child feel heard. This can immediately calm a situation, making it easier to begin working towards a resolution.

Once those strong feelings are acknowledged, the next step is to point out what was wrong about the behavior. For example, a parent could say:

The last step may be the most important

This last part of the formula is important, because if a parent gets too involved, he or she will inevitably be perceived as choosing a side – which could escalate feelings of rivalry further.

This is also why walking out of the room is important. That way neither child feels they need to put on a show for their parent to prove they’re right.

Over time, as your children become more familiar with this conflict resolution process and see that you have faith in them to work things out on their own, heightened conflicts should diminish.

Having children who fight can be aggravating, not to mention depressing and sometimes scary, if the relationship gets out of control.

We parents naturally just want the fighting to stop. To have peace in our homes. And ideally, to have our children enjoy each other’s company.

The advice and formulas shared in the book Siblings Without Rivalry can accomplish this with dedication and practice.

But even better, these strategies ultimately encourage problem solving, negotiation, and conflict resolution skills in kids.

This means that by implementing these strategies, we’ll (eventually) not only have more peaceful homes, but our kids will also be better equipped to handle conflict in any relationship – throughout their lives.

The Difference Between Punishment and Discipline and Why it Matters