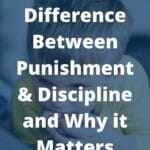 Understanding the difference between punishment and discipline and why it matters can help guide us towards more effective parenting.

It’s not unusual for parents to be confused by the differences between punishment and discipline.

In our modern language the two words are often used interchangeably, even though they originally meant very different things.

And when it comes to parenting, several key differences distinguish the outcomes we wish to achieve – with our child’s behavior and our relationship with them.

The contrasts between punishment and discipline boil down to your child or teen:

What does punishment mean in parenting?

To punish a child means to make them suffer for wrongdoing.

When a child is punished, the underlying belief is that the child will behave better if they become fearful of repeating the offense. It is believed that only through suffering will a child’s fear grow until they are uninclined to repeat the bad behavior.

One common characteristic of punishment is that the consequence imposed on a child is usually unrelated to the offense. There is no logic behind it, often because the aim is simply to make the child suffer in the most effective way possible.

A few examples of punishment include:

Do you notice a trend? Punishment often involves taking away objects or privileges that are of great importance to the child. In the case of spanking, the punishment, or intended suffering, is brought about by hurting the child and causing them to lose their dignity.

The drawbacks of punishing kids

While in many cases, punishing kids for wrongdoing does work, its effects are usually short-sighted and short-lived. If a child is punished because they’re doing something wrong, that child will likely stop. And it’s also possible that the child will become fearful enough of suffering that they won’t repeat the offense – at least for a period of time.

But even if a punishment is effective in the moment, the drawbacks are many. They include the following.

What does it mean to discipline a child?

Taking a look at the word itself, discipline shares the same root as the word disciple. A discipline is essentially a student – someone who needs instruction. Therefore, discipline is the act of teaching or guiding the disciple.

From a parenting perspective, discipline – especially positive discipline – is the act of teaching kids the best way to behave and act in the world at large.

Unquestionably, the best teachers are those who connect with their students in a way that makes their students want to listen, pay attention, and learn.

So in order to successfully discipline our children, we first need to establish a connected, loving relationship that will inspire kids to not only behave better in the moment but long-term.

The benefits of disciplining instead of punishing children

Here are a few of the benefits kids gain when parents use discipline instead of punishment:

Kids learn emotional regulation: Since a major component of discipline is to teach children, as parents embrace emotions and help children work through them, kids learn for themselves how to better regulate their emotions.

Kids strengthen their problem-solving skills: As children get older, parents can respectfully encourage and support them in coming up with solutions to the problems they face. Problem-solving is shown to be one of the essential skills our children will need as they get older.

What’s the difference between punishment and consequences?

Often not a lot.

Many parents impose consequences on their children thinking they’re teaching them a lesson, but in reality those consequences carry all the negative effects of punishment.

Often a consequence isn’t related to the situation, even though the adult thinks it is. And the consequence isn’t respectful or even reasonable. In fact, without even being completely conscious of it, parents will often impose consequences with the intention of causing their child to suffer, not to really teach them a lesson.

Since finding a consequence that meets all four of those criteria can be challenging, other parenting tools are often more effective, such as encouraging kids to problem-solve, offering limited choices, creating a routine, or discussing the issue during a family meeting.

Getting past punishment and using positive discipline

Often parents punish their kids without even realizing that the motive behind punishment is to cause suffering. If asked, these parents would never say that’s their intention.

That’s because their parents imposed the same punishment on them. Often these adults are simply unaware of better ways to address kids misbehavior that lead to more positive and successful outcomes.

It can be hard to break old habits and thought patterns, and anyone trying to do so will more than likely slip up from time to time.

Through practice, though, turning to positive discipline instead of punishment can lead both parent and child on a happier, more peaceful path that guides kids toward greater confidence, self-esteem, and general well-being.

Interested in learning more about positive discipline? Check out these resources:

Want to Raise a Self-Sufficient Kid? Using This Parenting Method is Essential

I’m the mother of two girls and a certified parent educator. I believe it is possible for parents to have a supportive, loving, and warm relationship with their kids while still raising them to be independent and ultimately self-sufficient. Over the years, I’ve read numerous books and articles that support this belief and put those ideas into practice with my own kids. Read more about me and Self-Sufficient Kids here.