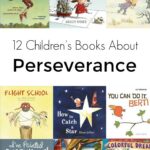 Teach kids the importance of perseverance and grit with these books – both fiction and non-fiction – that illustrate why staying with a goal, despite challenges or setbacks, can be so very gratifying.

** As an Amazon Associate I earn from qualifying purchases. **

Such a huge word both in letters and meaning.

And yet, being able to stick with something to reach a desired goal or destination is such an essential skill for success in life.

What if Nelsen Mandela had stopped resisting his government’s apartheid after 27 years imprisonment?

And then there is Vincent Van Gogh who easily could have assumed his artwork was worthless given the criticism he’d received over his lifetime.

Being able to persevere through difficulty and rise above, is a key to progressing in life. And while life experience teaches the most valuable lessons, hearing stories of others who have demonstrated perseverance can encourage kids when faced with their own challenges.

The following fourteen books contain stories of people from all walks of life – some stories are true and some are fictional, some are whimsy while others are serious, but all contain stories your kids will love as they take in the important messages they convey.

Michael feels the reason he isn’t very good at basketball is because he’s short. His mother suggests he put salt in his shoes and say a prayer to help him grow. But months go by and he still isn’t any taller. Finally, while talking to his father, Michael learns that being taller isn’t everything – it’s practice, determination and giving your best will that really make the difference. And the rest of Michael Jordan’s story is history…

The Most Magnificent Thing

A girl sets out to make the most magnificent thing – it should be easy enough, right? She knows exactly how it will work, all she has to do is make it. But making this most magnificent thing turns out to be anything but easy and she tries and fails repeatedly. Eventually, she gets really mad and decides to quit. But after her dog convinces her to take a walk, the girl comes back to her project with a new perspective and manages to get it just right.

Little penguin is determined to fly – he’s seen other birds fly, so why can’t he? He joins a flight school to learn how and while he remains at the bottom of the class, he still doesn’t give up his determination and dream of flying. Finally, with a little help with the technical parts, little penguin fulfills his dream of flying.

Luigi and the Barefoot Races

by Dan Paley and Aaron Boyd

A Chair for My Mother

by Vera B. Williams

A girl, her mother, and grandmother lost all of their furniture in a fire and now dedicate themselves to saving their spare change to save up for an easy chair. Their dedication to the goal pays off and the mother finally has a comfortable chair to relax in in the evenings after a hard day at work. This book is a classic and also on the New York Public Library’s 100 Great Children’s Books list.

Grace loves stories – all kinds of stories – and after she hears them she usually acts them out, often giving herself the most exciting role. So when Grace’s teacher tells the class they’re going to perform the play Peter Pan, Grace knows exactly who she wants to be. But other kids disagree: “You can’t be Peter – that’s a boy’s name.” her classmate Raj says. Natalie tells Grace she can’t be Peter Pan because she’s black. At home, Grace’s mom and grandmother try to help her overcome her discouragement and rebuild Grace’s confidence just in time for auditions. In the end, Grace learns that staying true to her dream – despite what others think or believe – pays off.

Irene’s mother gives her the task of delivering a gown to the duchess. The only problem is that a fierce snowstorm is brewing and the wind howling. But Irene sets out on her mission anyway. Through great adversity, Irene finally makes it to the palace and is rewarded with a hot meal, amazement, kind words, and the satisfaction of having completed her mission.

by by Giles Andreae

Gerald the giraffe really wants to dance at the upcoming Jungle Dance. The only problem is that he’s pretty bad at it. He decides to give it a try anyway only to have other animals make fun of him which makes Gerald feel sad. But then with the support of a cricket, Gerald to keep trying and he eventually proves the doubters wrong.

We all know the story about how Humpty Dumpty sat on a wall but but what happened after he fell? This story follows Humpty Dumpty, a bird watcher, whose favorite viewing spot used to be on the wall, that is until he fell. Now Humpty is afraid of heights…until he faces his fear.

This is the inspiring true story of Emmanuel Ofosu Yeboah. Born in Ghana with one deformed leg, Emmanuel overcame obstacles throughout his life. As a young boy he would hop for two miles to get to school, learned to play soccer and even began working at at thirteen to provide for his family. He also became a cyclist and rode 400 miles across Ghana in 2001. Today, Emmanuel works to spread the message that a disability is no inability.

The Noisy Paint Box is the story of Vasily Kandinsky and his path to becoming one of the first abstract artists. While the dialogue is imagined, the facts are true – such as Kandinsky’s ability to feel colors as sounds and sounds as colors. Kids see how Kandinsky’s art wasn’t accepted at first but with enough perseverance, persistence, and breaking from the norm, he eventually broke through to become a famous artist.

You Can Do It Bert!

In this simple story, Bert, a bird, is a little nervous to jump off of a branch into the water below. He contemplates what he’s doing and finally takes a leap, to find that what at first appeared scary wasn’t so bad after all.

The Fantastic Jungles of Henri Rousseau

The Fantastic Jungles of Henri Rousseau tells the story of Henri Rousseau, who first began painting at 40 years old. The book illustrates Rousseau’s dedication to learning about art, despite having never taken art classes. And his determination to keep perfecting his craft, despite continuous criticism from art experts. It’s not until Rousseau is 61 that artists begin to recognize the value of his work. Kids will not only learn about this famous artist but also see how staying true to oneself and not letting defeat get in the way allowed Rousseau to become the famous artist he is today.

Colorful Dreamer is the story of Henri Matisse and how he struggled through life to become a famous artist. As a boy, Henri was considered a dreamer, with no future or potential. And while he continued to paint, his parents held no hope for his success. But as he traveled the world and continued to pursue his passion of painting, more and more people noticed. And when he was ill and no longer able to paint, Henri began creating art from cutouts of colored pieces of paper. This story shows how determination and perseverance – even after experiencing a disability – pays off.

Hi! I’m Kerry, the mother of two girls and a certified parent educator. I believe it is possible for parents to have a supportive, loving, and warm relationship with their kids while raising them to be independent and ultimately self-sufficient. Over the years, I’ve read numerous books and articles that support this belief and I’ve put these ideas into practice with my own kids. Read more about me and Self-Sufficient Kids here. 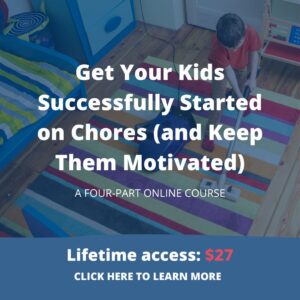