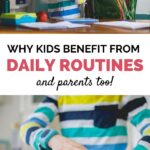 Kids routines provide children with cues throughout the day that encourage self-reliance and independence. Below are six ways kids and parents benefit from routines.

But I don’t want to be tied down to a schedule! I thought to myself as I read about the benefits kids and parents receive from following a routine every day.

The logic, research, and evidence all made sense. But I was still resistant.

Going through the same motions day in, day out sounded tedious and boring. Plus, I knew it would take a lot of work and discipline to make it happen.

But I was willing to try anything to help my daughter sleep better at night. ANYTHING.

So, for a few days, I thought through everything we needed to accomplish each day and when it would make sense to do certain activities – taking a bath in the evening instead of the morning, for example.

In my mind, a routine began to develop: wake up, get dressed, eat breakfast and a little free time before heading out for an activity such as library storytime or meeting up with a playgroup, etc.

At first, it was difficult to be disciplined. While certain aspects of our routine were flexible, I tried to make sure my daughter’s nap began at 1:00 every day and that we went upstairs to begin to get ready for bed at 6:30.

Within a couple weeks, we had found a rhythm. And you know what? Following a routine wasn’t that bad after all. In fact, I began to see how it was improving our lives rather than taking away from it.

Here are a few of the benefits I discovered from starting a routine with my toddler:

Anyone who has spent time with a young child knows that transitioning the child to a new activity can be challenging.

Saying “it’s time to brush teeth and get ready for bed” can be met with a defiant “No!” if the child wasn’t expecting the transition.

But with a routine, children become more attuned to what happens next. They know a nap comes shortly after lunch, for example. Or that getting ready for bed involves a bath, pajamas, brushing teeth, a bedtime story and then lights out. Like most people, children handle transitions best if they’re expected and familiar.

Young children have very little control over their lives. So, anything that brings them a sense of security and structure is welcome.

Routines do just that. They remove surprises, are dependable, and provide kids with a sense of security, which influences how children feel about themselves and their lives.

Brushing teeth, taking a bath, eating regular meals – these and other healthy habits are all more easily developed if done at a consistent time each day.

And as they grow older, children will find it easier to add additional good habits, such as setting aside time for homework or doing chores each day.

As habits become routine, kids gradually begin following a schedule without a reminder. Teeth and hair are brushed in the morning. Lunches are packed for school after eating breakfast.

These little acts of independence build upon themselves as adolescents take on greater responsibilities such as remembering to bring homework to school or packing sports uniforms on the day of an event.

Allows us to do more

There’s a long list of things parents are told to do with their kids on a regular basis. Examples include: reading to children every night, providing ample time for unstructured play, and getting kids outside for fresh air. The list could go on and on if we were to listen to all the “experts”.

While it’s impossible to follow every piece of parenting advice, it’s easier to find the time to fit a few of these things into our days with a routine. Picking and choosing which activities are most beneficial for our family helps reduce feeling overwhelmed.

Helps with sleep and mealtimes

As I mentioned earlier, my main motivation in following a routine was to help my daughter get to sleep. A routine, it was suggested, would give her cues throughout the day culminating in the ultimate cue of “it’s now time to sleep.”

After a month or so of following a routine with her, I began to see progress. She was getting to bed more easily each night.

Following a routine also helped with mealtimes and reduced the need for constant snacks. By eating meals at roughly the same time each day, my daughter and her body knew when food was on its way.

How to begin a routine and keep going

If you aren’t in the habit of following a routine each day, the biggest hurdle is to remember to do it.

The second challenge, especially when young kids are involved, is to communicate to them what they can now expect each day.

That’s where visual cues – like these routine cards – can help.

By placing these cards in a prominent place, such as with magnets on your refrigerator, everyone is easily reminded of what to expect next in any given routine.

For example, if getting your kids out the door in the morning has been an issue, outlining the steps that need to be taken each morning means everyone can independently check their progress.

Or if your kids would benefit from knowing which activities are planned during the day, line up the cards that show what they can expect and in what order.

If evenings are a challenge, put together a list of which task follows the next.

As kids become more familiar with each day’s routine, they’ll begin to do tasks in order without a reminder.

But what about spontaneity?

Sometimes when parents hear about routines, they picture doing certain activities at specific times with no flexibility.

But spontaneity can happen too, in little ways and big: a field trip to a children’s museum, a dance party after quiet time or a board game in the evening.

While kids often work better with routines, they also appreciate the willingness to do something out of the ordinary every now and then. This can work well, as long as we eventually go back to their familiar routine.

The benefits of starting kids routines when they’re young

Getting in the mindset of following a routine was a difficult transition to make.

But once I saw the benefits – for both my children and me – I embraced routines.

And here’s something I didn’t realize at the time: getting my kids into a routine when they were young has benefited them now that they’re older. The cues of knowing what happens next still occur, but instead of nap times and independent play, it’s now completing homework and practicing instruments, for example.

Routines can at first seem monotonous but their benefits can be priceless – helping us and our kids for years to come.

10 Parenting Practices That Pay Big Dividends When Kids Are Older