Want to Raise a Self-Sufficient Kid? Using This Parenting Method is Essential 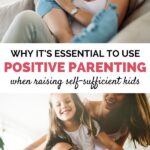 Positive parenting methods emphasize trust and respect. And are the most effective way to support children’s self-esteem and self-sufficiency.

“No! I won’t!” my toddler cried as she stood by the door, arms folded and tears streaming down her face.

We were in a battle to get her jacket on. And as her parent, I needed to win.

Or so I thought.

It had only been a few months since my sweet, innocent baby had morphed into a defiant disobedient toddler.

Suddenly, I was thrown into the role of disciplinarian, and I took that role seriously. Perhaps a bit too seriously.

Almost daily we would bicker. It was a similar pattern: I would tell her to do something and she’d refuse to do it. I’d get angry and she’d throw a tantrum.

Throughout these cycles, I’d tell myself:

I’m not going to be one of those parents who lets disobedience slide.

I’m not going to let my daughter get away with bad behavior.

I’m going to stand my ground and make sure she’s obedient.

Being firm and holding my ground would benefit her in the long run, I reasoned. No one was going to accuse me of raising a spoiled, entitled brat.

This seemed reasonable enough — except for one problem.

At the same time that I was strictly enforcing discipline on my daughter, it had become apparent that the bond between us was growing thinner by the day.

More often than not, we seemed to be more at odds than connected. And that hurt.

This wasn’t what I’d envisioned our relationship to be.

When I was pregnant with my first daughter I envisioned nurturing strength, independence and self-sufficiency in her.

My hope was that we would have a close enough relationship that I could coach and guide her. And hopefully, with any luck, she’d feel comfortable turning to me for advice and guidance.

But now, even in her toddlerhood, our relationship was feeling more divided than connected.

As the distance continued to grow between us, it was becoming difficult to conceive of how I could have any influence over her at all.

I desperately wanted to have a close relationship with my daughter. But at the same time, I felt strongly she needed discipline to best understand the correct way to behave.

And that’s when I stumbled upon positive parenting.

My angst had led me to seek advice. Fortunately, I came across two books: How to Talk So Kids Will Listen and The Successful Child.

These books opened up new concepts I hadn’t considered. In a nutshell, they suggested that the most effective way to discipline children isn’t through punishment, time-outs or criticism, but instead through empathy, connection, and trust.

These ideas, that all fall under the scope of positive parenting, provided a path forward to maintaining a close and influential relationship with my daughter while also providing discipline.

The more I read about positive parenting the more it made sense, as I reflected on my own life.

The people who’ve influenced me the most are those whom I respect and trust. And they gained that respect and trust through their respect of me – by listening to me and considering my thoughts and feelings and making me feel good about myself.

I wanted the same for my daughter.

But I still worried: would I become a permissive parent?

Before learning about positive parenting, I feared turning into one of those parents who pamper their kids and let them get away with everything and anything.

I feared turning into a permissive parent.

So I would crackdown at any minor infraction. Any time I got a whiff of disobedience I’d nip it in the bud with time-outs and stern words.

But now, with the ideas I was learning about positive parenting, it became clear that showing kids empathy, respect and kindness didn’t mean I couldn’t also discipline them.

The difference was that instead of using harsh words and punishment, I could instead show empathy first and then, when she was calm and ready for it, provide respectful guidance and boundaries.

What I soon realized was that this method of first establishing connection was also leading to less disobedience overall. While there were still moments when she would act out, the drama and tension between us began to diminish and I found myself in a better position to help her.

I also discovered that I now had the ability to coach her towards self-sufficiency.

Now that our relationship was on more solid ground, a trust was building between us and that allowed a number of things to flourish.

For one, my daughter seemed to sense I would always support her, and that I would always be there for her if she faced a challenge or if she was taking on a slightly scary endeavor. This seemed to give her confidence to grow in her independence.

Also, because of our close relationship, I perceived she was more open to my suggestions and advice than she might have been had I viewed her as a disobedient child.

And because of our close relationship of mutual respect and trust, I too felt I could better assess when she was ready to be nudged towards greater independence and self-sufficiency and when she may need a little more time and coaching.

But there was something else as well.

Throughout the transformation of our relationship, I began to realize this: kids aren’t out to get us parents. They don’t set out to be disobedient and disrespectful. They’re just trying to figure out the world around them and their place in it.

So now when I sense disrespect, I handle the situation from the standpoint of it being an opportunity for my child to learn, not an opportunity to punish.

I let my daughter speak her mind. I let her tell me exactly how she feels about a certain rule or decision she didn’t think is fair. And then we talk it over.

If that opinion is expressed in a disrespectful way, I let her know that – often by asking her if she would like me to talk to her in that way.

Letting my daughter speak her mind not only demonstrates to her I’m willing to listen to her opinions, but it also helps her find her voice in the world. It gives her practice in speaking her mind with respect and standing up for herself — a key characteristic of a strong, independent adult.

Positive parenting isn’t always easy, but it’s worth it.

Using positive parenting techniques takes discipline and a whole lot of patience on the parents’ part.

It’s so much easier to simply enforce rules and punish kids. In the short term, kids will often relent and behave when these methods are used.

But if our desire is to raise kids who have a strong self-esteem and self-worth to enable them to grow into independent and self-sufficient adults, these punitive methods do the opposite.

They tear kids down instead of building them up. Worst of all, they weaken the connection and attachment kids feel with parents. This gives parents little ability to coach kids and help them grow in their independence.

Getting started with positive parenting takes a little work, but the benefits are worth it.

And you may even find that your daughter will put on her coat without a fight.

10 Parenting Practices That Pay Big Dividends When Kids are Older

What Kids Really Need to be Confident, Independent, and Self-Reliant