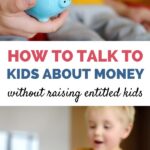 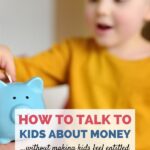 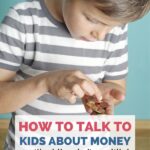 Inside: How parents can talk to and educate their kids about money without creating a sense of entitlement or fear about the family’s finances.

Money isn’t the first thing that comes to most parents’ minds as a high-priority topic to discuss with kids.

But similar to sex or drugs, our kids are going to learn about money somewhere, one way or the other. And similar to sex and drugs, what they learn could have a big impact on their lives.

As with the other topics, each family has values regarding money, and if we feel those values are important, we’ll want to pass them on to our children.

This passing on of information isn’t a once-and-done conversation. Instead, it’s better conveyed in an ongoing way, in everyday moments and ad hoc opportunities throughout our children’s lives.

But a stumbling block for many parents is an unease with discussing money at all. Whether there’s too much or too little money in the family, many parents don’t want to burden their children with money issues or inadvertently create a sense of entitlement.

The reality is that our silence can have unintended consequences. Research shows that parents who are open about money raise less entitled kids than those who avoid the topic altogether.

8 Tips for Talking to Kids About Money

If you’re worried about saying the wrong thing about money or just don’t know how to get started, here are a few pointers:

It may sound crazy to discuss money with a toddler. After all, most three year-olds barely know how to count.

But kids pick up on little things early on. In fact, researchers at the University of Wisconsin-Madison say children are able to grasp economic ideas such as value and exchange (at a basic level) as early as age three. This is also the age when kids are developmentally ready to learn delayed gratification and make choices.

You can find opportunities to discuss money with your toddler at the store, for example, explaining why you chose a less expensive box of crackers over another.

There’s also an opportunity to talk about money while your young child is playing “store.” If he’s using pretend money, you could talk to him about how money works and the value of bills and coins. He might not grasp everything you say in that moment, but you’ll be sending a signal that money is important and worth understanding.

Be open to questions

Kids will persistently ask awkward questions about just about anything, including money.

“How much money do you make?”

“Why does Sam have a bigger house than we do?”

While it’s tempting to brush these questions off, it’s important to recognize that your kids are asking questions to try to figure out the world around them, including money.

It’s not necessary to give exact income figures in your answers. Instead, use the question as an opportunity to share values. For example, you could talk about how different people make money or why some people choose careers that aren’t high in income but bring them fulfillment. Or explain that you don’t know why a friend has a bigger house, there could be a number of reasons why (and then share some of them).

If you’re stuck coming up with a response, an easy answer is to inquire further. You can simply respond: “why do you ask?” which might reveal a different reason than you expected.

If you have regrets about going into debt or not saving enough for retirement, tell your kids. Not only can they learn from these experiences, but they’ll appreciate your openness and honesty.

But just be careful about the way you share your history with money. The last thing you want is to glamorize a mistake (“I drained my savings to go on a fantastic two month trip around the world!”) or create an excuse for your child to make similar mistakes in the future. Your teenage child may rationalize that her parents turned out alright in the end, so what’s the harm in doing the same things they did?

It’s also important to be honest while shopping with kids. Telling a child that the family can’t afford something when technically they can will soon become an obvious lie, which may cause your child to distrust you on all matters, not only money.

Instead, you can talk about values, the family’s desire to save, or not overspend. These comments will be more educational in the long run as kids begin managing money themselves. 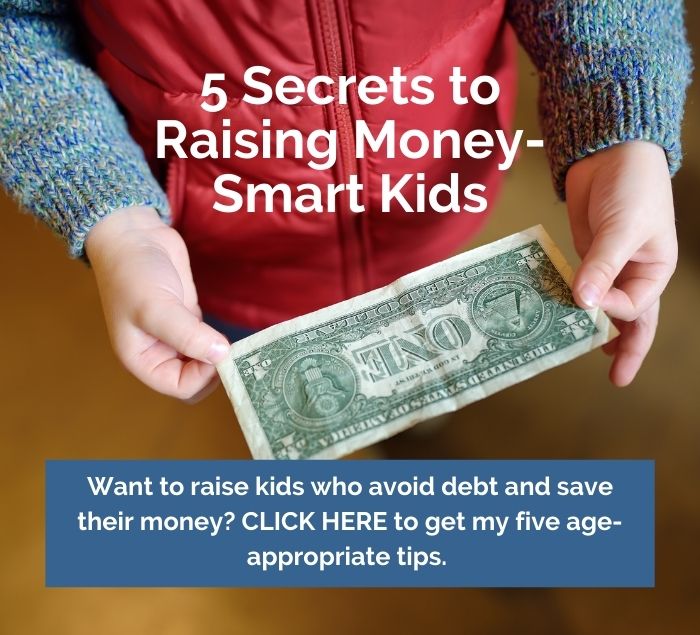 Parents tend to get nervous about discussing money with kids because they don’t want to reveal exact figures. If a child perceives that the parent makes a lot of money, they might feel entitled to get more. And if the child perceives the parent doesn’t make a lot, they may become worried or fearful.

The way to avoid either of these situations is to talk about values. What you value as a family could range from maintaining a minimalist lifestyle, to being able to grow your nest egg, to feeling greater financial security.

When we focus on values in money discussions with kids it educates them far better than trying to avoid a conversation or getting into specifics.

Use stories instead of lectures

As much as parents wish it wasn’t the case, kids don’t listen to lectures. We may have the best intentions but kids – and most adults – are more likely to grasp and internalize information if it’s told as a story.

Say you want your kids to understand why credit card debit can spiral out of control and wreak havoc on an otherwise serene life. Think of a story of someone you know and the trouble they experienced when their credit card interest accrued month after month. Avoid using people’s names, especially if it’s someone your child knows. Instead, you can just refer to the person as a friend or relative and keep it at that.

It’s also a good idea to try to weave these stories and lessons into everyday casual discussions rather than forcing your kids to sit down with you to share them. That’s why it’s also a good idea to begin talking to your kids about money when they’re young. That way you’re likely to come across more opportunities to discuss money over their childhood.

Preschool, elementary, and even middle school kids don’t need to know the details of your financial straits, but that doesn’t mean you have to hide them from kids. For example, try explaining to your kids why some of your spending choices have changed – such as not eating out anymore – because the business Mom worked at had to shut down.

And while high schoolers also don’t need every detail, they’re more attuned to their family’s financial situation and will feel deceived if information is hidden from them. In this case, a slightly more direct conversation may be called for. That way your teen will better understand why you’re suddenly telling him that the family can no longer afford a new car, for example.

Plus, if your teen is college-bound and your financial situation has changed, they’ll need to know how much financial support they can expect to receive from you when they apply to colleges.

A 2018 survey of parents revealed that they tend to talk to their sons about money more than their girls.

While the year-over-year gap of this trend is shrinking, it’s still important for parents to be aware of the necessity for girls to understand money just as well as boys.

Understanding money is empowerment. It allows anyone – male or female – to have greater control over their life by knowing how to finance life goals or avoid financial catastrophe. So not educating girls puts them at a disadvantage.

Women are also getting married later in life or not getting married at all, which means if you’ve assumed your daughter’s future husband will manage the family finances, that may not be the case.

In addition to talking to girls about money, mothers can also be good role models. The more mothers get involved in the family’s financial decisions, rather than simply relying on their husbands, the more they send a message of normality to their daughters.

Not everyone understands the intricacies of the stock market or how ETFs work. And that’s OK.

If there’s a topic your child has asked you or that you know is beneficial for her to understand, demonstrate that you’re eager to learn.

Your example will teach kids that it’s important to educate oneself about confusing financial topics rather than make assumptions and potentially lose money.

Take heart…it does get easier

Just like the prospect of talking to kids about sex can make a parent’s heart race, having a discussion about money can feel intimidating.

But the more practice we have in focusing on values and getting to the heart of what our child really wants to know, the easier discussions will be.

And also like the topic of sex, weaving money conversations into our everyday lives can be less stressful for both parents and kids. Especially if it begins to feel like an ordinary, rather than an extraordinary topic of discussion.

In the end, your conscious effort to talk about money with your kids will set them up for a lifetime of empowerment, rather than confusion, about one of the most important and ever-present aspects of their lives.

Kids Won’t Really Understand Money Until You Do This

How to Get Started on Kids Allowance – the RIGHT Way

12 of the Best Money Games for Kids

Kerry Flatley is the owner and author of Self-Sufficient Kids. She has a BA in economics, an MBA, a certificate in financial planning, and has been investing since she landed her first job. Kerry also has two girls, ages 11 and 13, who have had to put up with many talks about money over the years.