Not sure how to encourage self-sufficiency and independence in your tween and teen? This advice can help!

Gently you try to shake your 13-year-old awake.

“Time to get up for school!” you say in your cheeriest voice possible, even though you can’t believe your teen still can’t get out of bed on his own.

Your son gets ready, grabs a quick breakfast, and runs out the door to catch the bus.

Just as he’s leaving, you notice he’s left his trumpet behind. Yelling out the door after him you shout: “Don’t forget this!” holding up the instrument’s case so he can see it.

Smiling, he runs back to the door and grabs the case.

“Thanks Mom.” he says as he scurries off to the bus stop.

At least he was polite, you think – and (barely) made the bus on time.

Later as you pass by his bedroom door, you notice the piles of clothes on the floor and overall mess.

After all of the morning’s activities you sigh and quietly wonder:

“Is it even possible to teach teens to be self-sufficient?”

Tweens and teens are a special lot.

Just emerging from childhood, they yearn for independence but secretly aren’t confident they’re ready for it and truthfully only want it when it’s self-advantageous.

But the reality is that the tween and teen years are the perfect time to work on the skills our children will need to lead a confident and independent adulthood. Rather than learn responsibility through trial-by-fire as an adult, tweens and teens can slowly be encouraged into self-reliance with their parents by their side.

And it’s worth it to do this for our kids. Not only does self-sufficiency and self-reliance build confidence in teens but experts say there’s a link between self-sufficiency as a kid and being capable of living on one’s own and financially stable as an adult (i.e. not reliant on parents for money or live at home well into adulthood).

So how can parents encourage more self-sufficiency in their tweens and teens?

By following a few basic rules and steps, parents can nudge their tweens and teens towards self-sufficiency – which leads to greater self-esteem and success in college and adulthood.

But don’t expect it to be easy. Kids who have had their parents act as personal assistants for years probably won’t be willing to give that up anytime soon.

Parents can often be their own worst enemy when it comes to encouraging self-sufficiency in tweens and teens. As we continue to do basic chores and responsibilities for our teens – things they already know how to do themselves – we’re getting in the way of their mastery of these tasks.

A good rule of thumb is to ask yourself: “Would my teen be able to do this task if he were living on his own?” If the answer is “no” it’s time to start letting go and guiding teens towards greater self-sufficiency.

Click on the image below to access a list of the types of responsibilities and tasks your teen should know how to do before leaving home (You’ll also be signing up for my weekly newsletter that gives more advice about how to raise confident, independent kids): 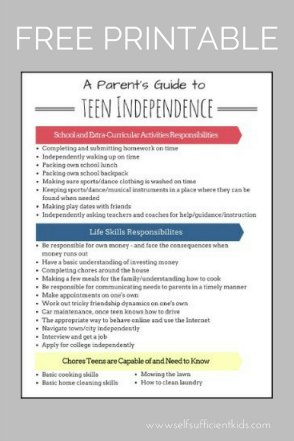 Suggested reading: How to Raise an Adult by Julie Lythcott-Haims

Related: Preparing Emerging Adults for College and Beyond

#2: Don’t be afraid of failure

It can be excruciatingly difficult to watch our son or daughter misplace homework or waste all of their money on an expensive sweater.  And oh so tempting to bail them out.

But nothing engrains a lesson of self-sufficiency more than failure. Having experienced the uneasiness of not being able to turn in an assignment on time or finding they’re without enough cash when friends want to see a movie, will motivate your teen not to make that mistake again.

And better for them to learn these lessons when the stakes are low. How much worse the experience would be when rent is due or an important project is due at work.

Suggested reading: The Gift of Failure by Jessica Lahey

Let’s say your middle schooler missed his scheduled in-school tutoring session. Sure you could give him a call five minutes before the next appointment. But are you prepared to manage his schedule for him his entire life?

Instead, ask your son how he plans to remind himself next time of the appointment. Further “encouragement” to find a solution could be letting him know he’ll be responsible for paying for any additional missed meetings.

Before jumping in with a suggestion for improvement, try to think of ways to get your teen to think for himself. He’ll appreciate the chance to think independently rather than being lectured to.

It can be difficult to look at our maturing children and wonder why they haven’t mastered certain tasks yet – such as keeping a room neat or waking up on time.

But criticizing their lack of growth will only discourage them and make them feel incapable of having ownership over the task.

Instead, look for the good and point it out. But be careful not to lavish teens with too much praise. Most teens would rather have it be accepted and natural for them to be taking the next step towards adulthood rather than pointing out their growth.

Remember when your kids were toddlers? How adorable it was when they tried to clean up spilled milk but ultimately left half still on the floor?

We don’t expect perfection from toddlers – they’re still maturing – and we can’t expect teens, and especially tweens, to be instantly successful at managing independence.

Despite their appearance as young adults, teens still have a lot of growing up to do. So let go, take a deep breath, point out the good, and be there for them as a supportive coach as they emerge into self-sufficient adults.

Kids, like adults, appreciate advanced warning when it comes to change. If you’ve decided it’s time for your son to wake up on his own (for once) let him know next Friday morning will be the last time you help. If he doesn’t get up on his own and misses the bus, he’ll have to figure out his own way to get to school on time.

It can throw tweens and teens off guard if we suddenly say they’re responsible for something spur of the moment. Giving advanced warning with the message of “I’m trying to support your independence.” might still get a few eye rolls but shows we’re there to support our teens, not throw them curve balls they’re not prepared for.

While it’s occasionally beneficial to show our love for our kids with a little assistance, the risk is creating a culture where kids become reliant on parents.

If your daughter is generally good about bringing everything she needs to school, then it’s probably OK to deliver her math homework she absentmindedly left behind this morning. Everyone makes mistakes and we can demonstrate what it means to be in a supportive family by occasionally helping each other out.

But if your daughter habitually forgets things at home, it’s time to draw the line. Make it clear that you’ve bailed her out too many times and it’s time she manages on her own.

Finding the balance between being supportive and letting tweens and teens take on independence can be tricky, but as we keep the larger picture in mind – to raise self-sufficient adults – it often becomes clearer what our kids need and what our role in helping them can be.

10 Life Lessons Kids Need To Experience Before They Leave Home

What Children Really Need to be Confident, Independent, and Self-Reliant