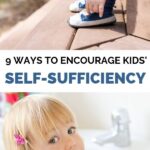 Are you eager to have your young kids do more for themselves? Here are nine ways to encourage and raise self-sufficient kids.

Is there anything more agonizing than running late for work and watching your 4-year-old try to tie his shoes?

Even if he’s successful in making a bow, it will likely fall out in approximately 48 seconds.

Putting you back to square one.

There comes a time in every parent’s experience where we want more than anything for our kids to be independent. For them to tie their own shoes, make their own breakfast or remember to change their underwear without a reminder.

Getting kids to the point of self-sufficiency can be challenging. We often find it’s easier to say:  “I’ll do it!” and take over a task just so we can move on with our day.

But each time we take over for our kids, we’re robbing them of the chance to learn on their own.

So how can parents encourage young kids to be self-sufficient without pulling their hair out?

While some independence comes naturally for kids, other tasks require coaching. In order to make the transition from dependence to self-sufficiency smoother, here are a few tips to keep in mind:

Sometimes getting kids to be more self-sufficient simply requires parents to consider which tasks kids can begin doing on their own. Perhaps your child doesn’t actually need you to make her her breakfast anymore? Or she is at the point of being able to brush her own hair? Often we become so accustomed to doing things for our kids we forget to question whether they are developmentally ready to do them on their own.

Once you’ve identified a few tasks your child could begin to do on his own, introduce the concept of independence one task at a time. Having kids tackle too many new skills at once can be overwhelming and discouraging.

Consider which tasks are likely to be easiest for your young child to master and begin with those. Success builds self-esteem and will likely make your child more willing to take on more complex tasks later on.

Patience is a virtue

It can take an enormous amount of patience to stand back and let kids tackle tasks on their own. Even simple chores can take kids what seems like an eternity to finish.

But being willing to be patient in the moment, means down the road your child will be more capable and self-sufficient. And reaching this level of competency ultimately means less work for you and a greater sense of self-esteem and independence in your child.

Sometimes chores are tricky for kids because the tools needed to complete the task aren’t made for small hands and bodies. This is where kid-sized tools can be handy, for example:

It’s worth it to consider if a task is really too difficult for your child or if they simply don’t have the right tools for them to be successful.

Your kids will not clean up spilled milk as well as you do or make their beds to your level of perfection.

The first hurdle is for them to feel capable of doing these tasks on their own and taking on responsibility. Perfection can come later.

Critiquing the way your daughter picked up her room is only going to make her feel incapable of doing it on her own.

Instead, praise the effort first and then ask if she’d like a few pointers on how to make her bookshelf even neater. It’s tricky initially to hold back suggestions when you know a task can be done better, but restraint will help build your child’s confidence in the long run.

Remember, kids often have no context for what’s considered “good” or even “good enough”. Gently guiding them towards an understanding of doing a task well may take some time and coaching.

Having kids take part in family chores not only builds their self-esteem but also encourages greater self-sufficiency.

If you’re ready to give your kids chores, even if you tried before and failed, click on the image below to learn more about my FREE four-day course. The course covers how best to motivate kids to do chores as well as how to reduce your need to nag. You’ll also receive my Age-Appropriate Guide to Children’s Chores as a bonus.

Visual reminders can be a great way to let kids know what they need to do without having to nag them.

Keep the end goal in mind

It can be tortuous to stand by as our children take forever to get dressed, brush their teeth or tie their shoes. Not to mention how imperfectly they clean up their toys or spilled juice.

But if we’re willing to invest a few minutes of time and let go of perfectionism, we’ll find that as our children get older they’re more capable, responsible, independent, and are inching closer towards self-sufficiency. Which benefits both them and us.

Why Kids Need Chores to be Successful in Life

How to Raise Responsible Kids Who Want to Help