How I Raised Kids Who (Willingly) Eat Vegetables, Adore Fruit, and Make Healthy Food Choices on Their Own 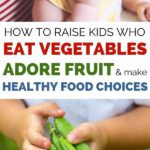 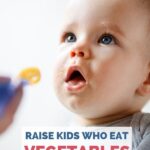 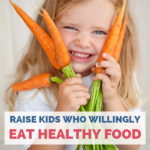 Inside: You don’t have to be a dietitian to raise kids who make healthy food choices. Here are a few of the things I did that I believe made a difference.

“Can I have more salad?” my eleven-year-old daughter asked as we were nearing the end of dinner.

She had just taken the last bite of her meal and wanted more – more of the red pepper, carrot, and lettuce salad I had served as a side dish.

“Of course!” I responded, finishing my own last bite and wiping my mouth with my napkin.

Her request didn’t take me by surprise. It’s not unusual for my daughter to willingly eat vegetables at mealtime. She often has avocado on toast for breakfast, will beg me to make a kale, almond, and lemon dressing salad for lunch, and eats an apple or pear after school if they’re available.

Her sister isn’t too different. While she doesn’t share her sister’s deep love for avocados, she, too, has been known to request a second helping of my Asian-inspired coleslaw. She gets wide-eyed when she sees I bought a pineapple at the store and often pops a few fresh cherry tomatoes as a snack.

Now, before you write my kids off as freaks of nature, let me say that while my children do willingly eat vegetables and fruit, they also love a good bar of chocolate (as does their mother), sometimes crave potato chips, and would say their favorite foods are mac n’ cheese and bacon, respectively. In other words, even though they generally eat healthfully, they’re also human.

Let me share with you how I think we got to this point.

My approach to raising kids who make healthy food choices

I’m just a mom, not a nutritionist. So I can’t claim that these techniques are backed by science, or will work with every child. But I have an inkling some of the methods I’ve used to raise kids who make healthy food choices could turn other children into veggie-loving kiddos too.

It all started with my goals as a mom. I wanted to raise kids who have a healthy relationship with food. To me, this means kids who aren’t turned off by vegetables, eat with moderation, and who have a general understanding of which foods are nutritious.

Everything I did was guided by that mission. Here are a few things I did that I believe made a difference:

Let babies develop a taste for the real thing

Neither of my kids ever ate jarred or packaged baby food, except when we went on trips and little else was available.

While there’s nothing wrong with the jarred options in general, nearly all of these packaged foods tend to have a sweet taste, which means babies have little chance of developing a palate for anything else.

Spinach is often sweetened with apples, beets are combined with strawberries. In other words, babies’ diets consist almost exclusively of foods with a mild, sweet taste. It’s no wonder then that later in childhood they aren’t interested in eating foods with more diverse flavors.

Making baby food at home is so easy – it can literally take minutes. I never had a fancy baby blender – just a food processor and a baby food mill. I often made extra that I froze in these trays for a future meal.

Between the ages of 6-12 months, my daughters ate not only real mashed-up bananas and avocados, but also steamed and pureed beets, green beans, carrots, broccoli, red peppers, and squash, to name a few. I also fed them dishes like curry chicken and beef chili, taking a meal I’d made for my husband and me and pureeing it in a food processor.

Today, they have no problem eating strong flavors or spices. And as I mentioned earlier, they eagerly eat vegetables.

I have no verifiable proof, but I think these early forays into eating real food made it easy for my girls to continue to eat a wide variety of foods into toddlerhood and beyond. (This article shows there may be some truth to my theory.)

And what if you’re already beyond the baby stage? Keep reading…some of the other techniques I’ve used can help older kids warm up to eating vegetables and other healthy foods.

No good or bad foods

Once my kids were old enough to make more food choices on their own, I tried my best not to position vegetables as something they had to eat.

I say “tried my best” because when my kids were younger, my husband and I didn’t always keep vegetables in the neutral zone.

There were nights, for example, when one of our girls would eat the cheesy potatoes on her plate but leave the green beans behind. In that situation, it didn’t seem right to then let her move right on to dessert.

So, we’d tell her she had to first finish her green beans.

This inadvertently communicated to her that vegetables are foods you have to endure, not enjoy – far from the message I wanted to send, although I didn’t recognize it at the time.

Since then, I’ve read articles from dietitians that make an important point: by using food as a reward (or punishment) it can change a child’s relationship with that food. Over time, if done consistently, this practice has been shown to increase children’s risk of emotional eating and preferences for less healthy foods, while also decreasing their ability to regulate their food intake.

Today, we do things a bit differently. If someone doesn’t like the vegetable served they can choose another one that’s readily available. After all, as my girls are quick to remind me, we all have foods we don’t like.

Which leads into my next point…

Recognize that kids have their own likes and dislikes too

If anyone served me these vegetables, I’m not sure I could stomach them. And if someone told me I had to eat them, I’d be pretty upset.

Granted, kids’ taste buds are still developing and can change over their childhood. But being forced to eat something they don’t like can make them despise that particular food.

Instead, nutritionists suggest, offer rejected foods a number of times, especially when kids are toddlers. It can take children as many as eight to fifteen exposures to a food before they accept it.

This happened with my youngest. For years she hated beets and couldn’t believe I liked them roasted. But then, not too long ago, she took a bite and realized she did like them after all.

It can be tricky to determine if a child really doesn’t like something or they just don’t feel like eating it at that particular moment. But pushing kids to eat certain foods may have the effect of turning them off to that food forever (or at least until they’re adults).

Show kids that treats can be healthy and occasional indulgences OK

In an ideal world, I wouldn’t allow my kids to have any sugar, processed foods, or trans fats.

In that world, I’d also put them in a protective bubble, only releasing them at age twenty-five when they’re magically well-adjusted and socially adept.

Since that world doesn’t exist, I instead take the attitude that when it comes to food, I want to show my kids that occasional indulgences are fine, and are a reasonable complement to healthy eating.

Also, I want them to see that there are plenty of tasty and fun treats that are good for them.

That’s why I stock our pantry and fridge with healthy snacks: pretzels, fruits and vegetables, whole wheat pita chips, hummus, and peanut butter, to name a few.

I’m also known to make “killer” black bean brownies (thanks to this recipe), as well as other healthy desserts such as these sugar-free banana and oat cookies and these peanut butter Rice Krispie treats.

The message I hope I’m sending to my girls is: making healthy food choices doesn’t need to be a sacrifice and no foods are entirely off-limits, just eaten in moderation.

Be a good example

This last tip is obvious but it needs to be said. None of the above advice will make an ounce of difference if you aren’t making healthy food choices yourself.

There’s no point in trying to get kids to eat broccoli for dinner if you aren’t eating some yourself. And, for example, you can’t expect your kids to never drink sugary drinks if you drink them.

That’s why my daughters regularly see me eating a wide range of vegetables, snack healthfully, and trying new foods. They’ve also seen me give into a chocolate indulgence from time to time, pick up a few deep fried snacks occasionally at a convenience store, and sometimes order a big dessert like Baked Alaska at a restaurant.

There also are times I’ll forgo a treat I really want, just to be a good example for my daughters.

The bottom line is, you don’t have to become a healthy-eating superstar to be a good example. Just try to demonstrate that you have a positive relationship with food (and body image, but that’s a topic for another time) and your kids are likely to do the same.

And eventually, you may find your kids also asking for a second helping of salad.

15 Life Skills That Kids Need Before They Leave Home

Teach Kids to Cook by Age and Ability

Posted Under: Toddlers and Preschoolers