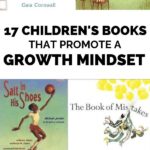 Reinforce a growth mindset in kids with these cards. Each card contains an words of encouragement to remind kids to keep trying, that progress is more important than perfection, and that failure is normal and an opportunity to learn. Click here to find out more.

Are you wondering when it’s appropriate for kids to begin doing certain tasks on their own? Sign up for my weekly emails and you’ll receive my one-page Age-Appropriate Guide to Kids’ Independence as a free gift. It’s essentially a chart showing which tasks parents can expect their kids to be doing at which ages. (Click here to subscribe and get your free list).